A Beacon of Comfort

A Beacon of Comfort

As a 17-year-old student, Barbara Ledbetter walked into the Mobile Infirmary in 1962 as a new employee. Now, after working there for more than 50 years, my mother speaks of her service in the medical industry with passion. She has seen a world of change in the medical field, and the values she has held at work greatly impacted our values and beliefs at home.

An influencer who readily shares her work experiences with conviction, she positively contributed to my career choice. I’ve always felt able to have independent thoughts, and I have created my own way, but my mother absolutely has been a mentor in my personal and professional life. Entrepreneurs face obstacles often, and the foundation of their success hinges on the values they bring to their company. My mother’s attitude, determination, and work ethic have been a saving grace to many, including me.

In 1962, she entered into the radiology program at Mobile Infirmary. At the time, it was the second largest hospital in Alabama. She recounts her  feelings of pride when she would don her white uniform that was a symbol of dedication and compassion in a time of war and economic decline. The white doctors' coats and nurses' uniforms were signs of hope and care for patients and their families.

Barbara recalls many aspects that have changed over time, such as going from allowing smoking in waiting rooms to being a smoke-free campus. Decades of research and innovation have brought advancements spanning from medical imaging to pharmaceuticals and surgical procedures. My mother marvels at the success rates of the patients who benefit from streamlined processes and technological assistance—an ongoing medical revolution.

Barbara Ledbetter has dedicated a life to service. At her retirement party on March 1, 2018, it was said, "If the hospital’s timeline were a quilt, Barbara’s thread would be woven throughout.” I feel blessed to have a mother who has used her career and comforting spirit to be a beacon of direction and hope for me, as well as all the people she has come into contact with throughout the years. Using those principles of hard work and longtime service, I am proud to be a part of MDreferralPRO, continuing her legacy and setting an example to my own children. 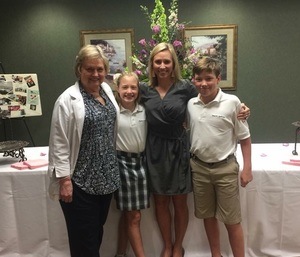 Loved this? Spread the word

How My Overdose Saved My Life an interview with Amy Parker